Episode 1 – A Couple of Cuckoos

Episode 1 – A Couple of Cuckoos 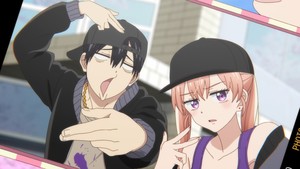 Episode 1, “You’re Going to Be My Boyfriend” is a fascinating premiere. It’s premised on the question, “What would happen if some nurses made a MASSIVE mistake that resulted in potentially comedic consequences instead of trauma?”

Now, how does it answer this question? The answer is relationships.

But let’s backtrack because there’s a lot between that, including an ABSOLUTE BANGER of an OP by Yoshioka Kiyoe that had me hyped to get to know the cast and see how things will probably play out over the next three months of my time with this series.

Our protagonists are thus: studyholic Nagi Umino and pretty-girl Erika Amano. Like cuckoos, both have been effectively storked by hospital mismanagement. And side note: no one rectified this until sixteen years in which is just buckwild, but roll with it because I don’t sense this’ll really ever get examined in any depth….