How would you rate episode 11 of
Sabikui Bisco ? 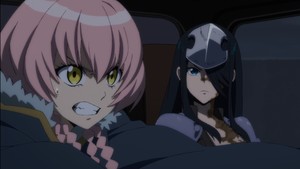 Turns out it takes more than a few mushrooms to topple a walking colossus with enough firepower to turn an entire city into a junkyard, but that’s not going to stop Milo from letting his arrows fly. The season’s climactic battle against the reanimated and Kurokawa-possessed Tetsujin continues into its second week, with both predictable and surprising developments. As a final boss fight, it might be overstaying it’s welcome, and for better or worse it will continue into the next and last installment of this adaptation. As an exhibition of Sabikui Bisco‘s quirks, however, this extended assault still shakes out to be a fun survey of the series’ fun idiosyncrasies.

For example, I really enjoy that the episode opens with a break from the action, instead giving…