The April issue of Shogakukan‘s Monthly Sunday GX magazine revealed on Saturday that Rei Hiroe‘s Black Lagoon manga will have a second spinoff manga by Hajime Yamamura titled Black Lagoon Eda -initial stage- that will launch in the magazine’s next issue on April 19. The manga centers on Eda, the original manga’s undercover CIA agent based in Roanapur’s church, during her early days as a rookie in the CIA. 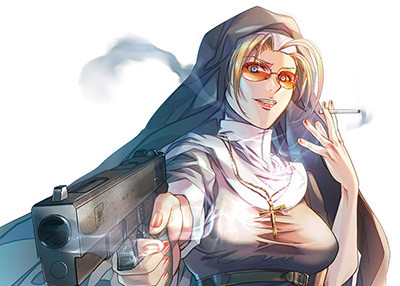 Yamamura’s Kamisama Dolls manga, which ended in 2013, inspired a 13-episode anime series that aired from July to September 2011. Crunchyroll streamed Kamisama Dolls in various countries as it aired in Japan.