How would you rate episode 9 of
Tribe Nine ? 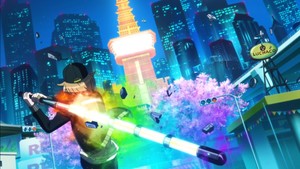 Episode 9, “Walk-off Win” picks up in medias res, which would be interesting if this show wasn’t Tribe Nine. Well, okay: that’s actually being a bit mean to the show because it finally digs into something really, really cool: Ojiro and Kazuki’s backstory, which was thuddingly hinted at in the final moments of episode 8. But unfortunately, we don’t get to spend time with that upfront: like I said, we’re in medias res, so initially, that means joining the Minato Tribe in their fight against the Ota Tribe, a team all about the chaos. Unfortunately for Team Minato, most of their team is down because… chaos.

Oh yeah, and Kazuki joined the Minato Tribe to get revenge against Ojiro. More on that… never? Later? Later.

And see, this is the problem: Tribe…