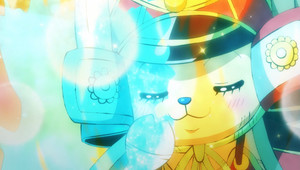 This is one of those episodes that I struggle to write a review for. Most of the runtime is setting up for the next round of one versus one fights across Onigashima, while a dozen other battles are still raging. I would not go so far as to say that Wano is as bad as Dressrosa in regards to fight pacing and having too much going on, but it’s still hard not to be overwhelmed by the sheer amount of stuff happening and how many characters are involved.

Very little actual fighting happens in this episode to boot. It’s mostly characters talking about getting ready to fight their next opponent: Jinbei and the beast pirates, Franky and Sasaki, Ulti and Nami, etc. Even if well-animated and directed, watching “Grrrr, I’m gonna beat you up!” repeated a few dozen…