How would you rate episode 9 of
Slow Loop ? 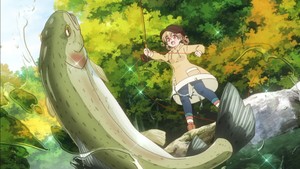 “I Wanna Go on a Fishing and Camping Trip!” gently guides us into autumn, with Koi taking the lead, until Hiyori and Koharu reveal that they’ve run away from home via a sudden appearance that breaks Koi’s rather poetic musings on the seasonal change.

As to what caused this sudden departure, it turns out that Koharu and her step-sister were forbidden from going camping alone because… well, because they’re high school students, which doesn’t feel quite fair. (It’s also because Koharu’s father worries for his daughter who did take ill in episode 8.) Both Koharu and even the typically coolheaded Hiyori reacted rather poorly to their father’s ultimatum, and the rest, as they say, is history.

It’s as simple a conflict as it gets, but quickly becomes a…