How would you rate episode 6 of
Sakugan ? 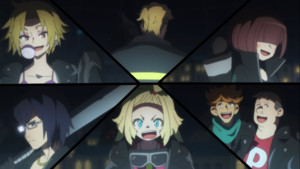 So far, Sakugan‘s strength has been in its relative simplicity. There are of course larger mysteries about the world and Memempu’s quest to fuel the overarching plot, but on an episode-by-episode scale it’s kept its plotting pretty simple. Go to a new place, introduce and flesh out a new character, have somebody maybe learn a lesson inbetween some madcap antics, cue adorable end credits. “JUSTICE FOR VILLAINS” marks a departure from that, as the series tries a much more complicated and ambitious narrative, with rocky results.

That rockiness mostly comes from the structure of this episode. There’s a lot going on in this, between getting Gagumber and Memempu to the AreYear colony, introducing said Colony’s gimmick and relevant history, getting involved with Yuri’s crew and fleshing out his…