Eevee will be the first non-Pikachu Pokémon to be represented 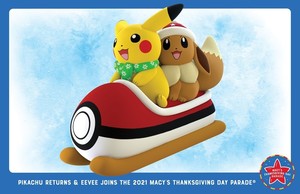 The Pokémon Eevee will make its debut at this year’s Macy’s Thanksgiving Day Parade as the first non-Pikachu Pokémon to be represented. Instead of a lone Pikachu as featured in last year’s event, an Eevee and Pikachu balloon will fly over Manhattan, riding together on a 34-feet tall Poké Ball-inspired sled.

The event will also celebrate the Pokémon brand’s 25th anniversary. The series was first represented at Macy’s in 2001, and three versions of a Pikachu balloon have been previously featured.

Colin Palmer, vice president of marketing for The Pokémon Company International, described Pikachu and Eevee as the “perfect ambassadors,” saying, “Pikachu remains an icon of the brand, and its annual appearance in the Macy’s Parade has been delighting fans and families for decades. The introduction of Eevee,…