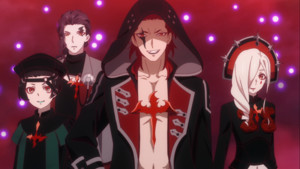 Ange Yuki is a lonely boy with no family. He travels to Harajuku to see his favorite artist, and there sees an intense musical battle between the bands Eclipse and Lost Eden, their energetic performance striking a pain through his heart.

Visual Prison is an original anime and streams on Funimation on Fridays. 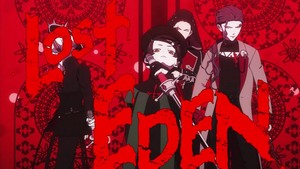 Well, I’ll at least say this for Visual Prison: I was never bored.

At its most basic level, Visual Prison is about a world where all those crazy-dressed visual kei bands are actually groups of vampires. This is the most believable plot of this season. I mean, it makes sense. They dress in pseudo-anachronistic clothing, disguise their true appearance with makeup and contacts, and lure in an audience of rabid young goth fans who are totally down with all…