How would you rate episode 1 of
Sakugan ? 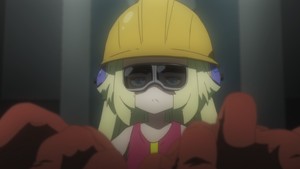 In distant future, long after the Western calendar is no longer used, humans live shoulder-to-shoulder, cramped in the “Labyrinth,” an underground world deep below the surface. The place is known for extreme high temperatures, but also for lodes of gold, silver, and other riches. In one of the colonies named Pin-in, a curious nine-year-old girl named Memempu and her father Gagumber board a two-person work robot and mine for ore. They eke a living as the lowest of lowest “Worker” occupations. One day, Memempu begs her father to set out as Markers — those who chart the innards of the Labyrinth as a spelunker — to search for her mother who left their home. A Marker is the most dangerous, but also the most lucrative, job. Gagumber decides he cannot hold back the ever-curious Memempu from…