Both parallel-world films to open simultaneously next year 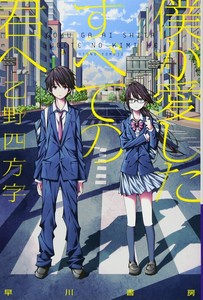 Hayakawa Shobo announced on September 9 that Yomiji Otono’s Boku ga Aishita Subete no Kimi e (To Every You I’ve Loved Before) and Kimi o Aishita Hitori no Boku e (To The Solitary Me That Loved You) novels are inspiring two anime films, which will open at the same time next year.

Otono released the two science-fiction romance novels on the same day on June 23, 2016. Both complement each other, but can be read in either order. The books take place in a world where traveling to parallel worlds is a common, everyday occurrence.

Boku ga Aishita Subete no Kimi e centers on Koyomi Takasaki, a boy who lives with his mother after his parents divorce. He attempts to make friends in his new college prep school, but his social awkwardness combined with an atmosphere of focusing on studies means he is unsuccessful. One…