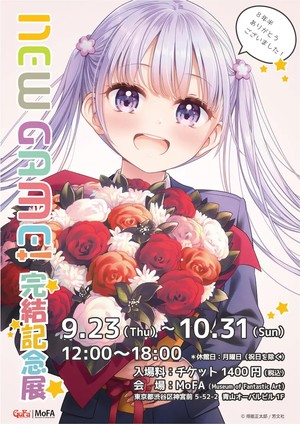 Shōtarō Tokunō‘s New Game! workplace manga officially concluded in the October issue of Houbunsha‘s Manga Time Kirara Charat magazine on Friday. Fans can commemorate the occasion with an exhibit in Tokyo’s Museum of Fantastic Art (MoFA) from September 23 to October 31. A virtual exhibit will also be held from October 2 to November 7.

The exhibit will also begin selling Tokunō’s Next Game!! artbook on September 27. Buyers will receive a free book cover depicting the original illustration used for the exhibit. Other goods will also be available for purchase.

Tickets will be sold through LAWSON convenience stores starting from September 9. Details about the virtual…