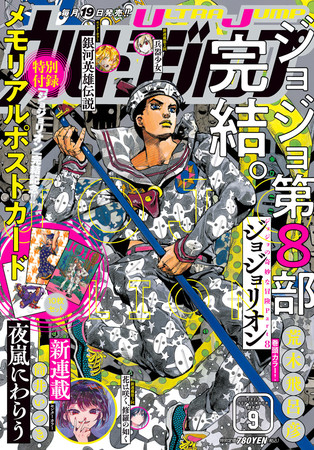 The magazine also announced that Araki’s JoJo’s Bizarre Adventure series will get its first spinoff manga (aside from Thus Spoke Kishibe Rohan) this winter. Kouhei Kadono (Boogiepop and Others, Hajishirazu no Purple Haze light novel of JoJo’s Bizarre Adventure: Golden Wind) is writing the story, and Tasuku Karasuma (No Guns Life) is drawing the manga.

The JoJolion manga debuted in Ultra Jump in May 2011. The manga’s 26th compiled book volume shipped on May 19, and the 27th volume will ship on September 17.