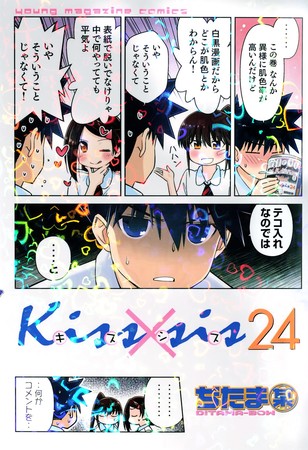 Manga creator Bow Ditama revealed on Twitter on July 21 that his Kiss×sis manga will end in two chapters.

The manga inspired an OAV adaptation that shipped with volumes of the manga beginning from its third volume in 2008, and ending with its 12th installment in the 14th volume in 2015. Discotek Media released all 12 episodes on Blu-ray Disc on January 26. The company describes the anime:

Keita is studying hard for a high school entrance test, but his two beautiful elder twin stepsisters are a constant distraction. Though they mean well, Ako and Riko are also extremely sexually assertive and interested in Keita. At first, he fends them…