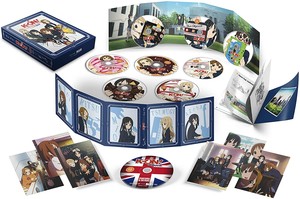 On Monday August 16, Funimation will release a Limited Blu-ray set including both of the K-ON! TV series by Kyoto Animation, and the 2011 K-ON! movies. The set will also include a five-panel soft digipack, six art cards and a 40-page art book.

The first TV season of K-ON! was broadcast in 2009. Based on kakifly‘s four-panel comedy manga, it was directed by Naoko Yamada and scripted by Reiko Yoshida, as was the second series and the film.

Being late on the first day is exactly what you’d expect from Yui Hirasawa in her freshman year at Sakuragoaka Girl’s High School. The number of clubs fighting over her to join up is decidedly unexpected, and Yui has no clue which club to join: she’s not very athletic and knows next to nothing about the liberal arts, but she’s determined to do SOMETHING this year. As…