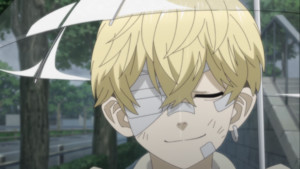 Takemichi is not a smart man. That’s been apparent since episode one, and has been reiterated every time he’s been forced to socialize with actual teenagers, but it’s become inescapable now that Revengers‘ plot has shifted into mystery-solving mode. While our hero has made great strides in regards to determination and reliability, picking up clues is just not his forte and seemingly never will be. That’s understandable, and in some ways helpful when the audience needs things explained to us that Takemichi should by all rights already know, but boy does it make this episode in particular frustrating to watch.

Put simply, the number of times our hero’s only dialogue is to ask other people to explain things to him is kind of staggering, as he ping pongs between different characters to slowly piece together information that the audience almost certainly figured out weeks ago….