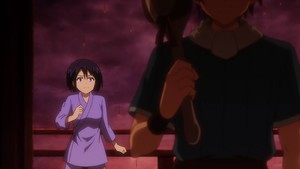 A major question at every step of I’m Standing on 1,000,000 Lives is what are the Game Master’s
true intentions with these quests? On the broadest scale is the effort to make sure the
Heroes are properly prepared for the disaster befalling Tokyo in the future, and that they grasp
the value of life to want to prevent it. But each quest they tackle in the fantasy world also seems
to end up, coincidentally or not, having ramifications on the status quo of that world. As their
latest mission has been nominally centered around the traditions of the nation of Jiffon, there’s
already been an undercurrent of restoring the place’s values apart from just making sure its
people aren’t eaten by orcs anymore. But the climactic events of this episode make clear how
that element may have even been more central to the task than we previously thought.

The first half of the episode effectively…