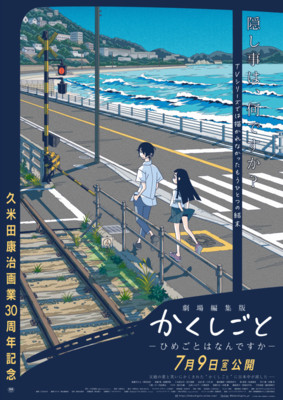 The August issue of Kodansha‘s Monthly Shonen Magazine revealed on Tuesday that Kakushigoto: Himegoto wa Nan Desu ka (What is a Secret?), the theatrical compilation film for the the television anime of Kōji Kumeta‘s Kakushigoto manga, will have a bonus two-booklet manga for theatergoers titled Himegoto. The manga’s two booklets will be available for theatergoers on the first and second week of the film’s screening, respectively, with the first booklet being 14 pages long, and the second booklet being 20 pages long.

Himegoto will show a story set after the end of the Kakushigoto manga. Kumeta is drawing the manga.

The film will open in Japan this Friday, July 9. The film’s limited edition Blu-ray Disc will launch on the same day exclusively at theaters in Japan.

The film commemorates the 30th anniversary of Kumeta’s career as an illustrator. The film will feature…