Spy x Family Had Twenty Studios Fighting to Animate It

Mobile app data analysis organization Sensor Tower reported on Wednesday that Ni no Kuni: Cross Worlds, Netmarble‘s smartphone game based on Level 5‘s Ni no Kuni game series, reached over US$100 million in revenue during its first 11 days. The game reached this milestone faster than Niantic‘s Pokémon GO, which did so in 12 days. 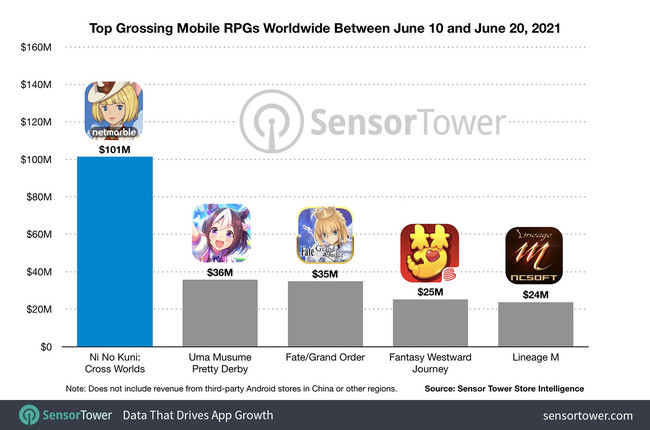 Ni no Kuni: Cross Worlds is currently available in Japan, South Korea, Taiwan, Hong Kong, and Macau. As pictured in the above chart, the game ranks as the top grossing RPG worldwide between June 10-20.

During Ni no Kuni: Cross Worlds’ first 11 days, the title ranked at #2 in terms of worldwide mobile game revenue with about US$101.3 million. Japan accounted for about 45% of this number with approximately US$45.6 million in revenue. South Korea accounted for about 35%, and Taiwan represented about 15.7%. The #1 title was Tencent‘s Honor of Kings….